The Barracks: a new form of immigration detention

Since September 2020, hundreds of people have been detained at army barracks in Kent and Pembrokeshire. The Home Office uses the word ‘housed’ but if we listen to the voices of those inside the barracks, and those who have experienced immigration detention, it becomes clear that living in the barracks is akin to being locked up in a prison.

At SDS, we support people in immigration detention to take control of their cases and resist their imprisonment and deportation. Judging from our experience of standing in solidarity with people who have been detained, we feel it is only right to name what is going on at the barracks as another form of incarceration.

By amplifying the voices of people living in the barracks, we strip away the Home Office’s facade that the barracks are suitable accommodation for people who have escaped war, persecution and poverty. SDS recently received a voice note from someone who spent months living in the Napier Barracks. His words speak volumes:

‘I left the camp three days ago. There were no arrangements at all. I took a Covid-19 swab 2 days before leaving and it was negative. We were all waiting and praying for our turn to come for the next relocation. I left to a hotel located in London and I’ve been here for three days. We don’t know how long we will be staying here, but this place is a lot better than the one before. It was like a prison. No one told me what would happen next or how long we will be staying here. Of course, uncertainty and the ambiguity of the future affects our sanity, mental health, and overall our general health. There is anxiety and fear of the future. We hope the future becomes more clear so these anxious thoughts and fears come to an end. In this place, my mental health has improved a lot. A lot better than when I was detained in the camp. We hope things get better for the rest of us as well.’

Throughout the harsh winter months, hundreds of people have been held in these inhumane, unsanitary conditions in army barracks in Kent and in Wales. The barracks have been declared unsuitable for accommodation by planning and environmental experts. There is a lack of drinking water and heating, poor plumbing, and it has been impossible to maintain social distancing as dozens of people share a room. In the barracks, people do not get adequate legal support nor healthcare, and they have no idea how long they have to stay there.

A right-wing politics of hate has led to the horrors we see at the barracks. In recently leaked documents, it was uncovered that holding people in the squalid conditions in the barracks was, in fact, a political decision. The Home Office moved people to the barracks after far-right groups disagreed with housing asylum seekers in hotels. This government already strips those who cross borders to get here of their humanity,  and far-right propaganda bolsters this by justifying these substandard living conditions.

If the far-right’s voice is loud enough to influence government policy, we need to be louder. Collective actions help to highlight the horrors of what happens in immigration detention. From protests to hunger strikes, people held in immigration detention centres in the UK have always risen up and resisted their own imprisonment. We see this defiant fervour from those currently held the barracks. They have gone on hunger strike and held loud, colourful protests with banners and chants.

Many of us are standing in solidarity with those protesting their imprisonment in the barracks. Hundreds joined Lesbian and Gays Support the Migrants’s online rally last week to hear speakers such as Zarah Sultana MP. Petitions by Freedom from Torture and Detention Action’s email your MP online tool to demand the closure of the barracks are also examples of ways we can stand with people held there. These collective actions shed light on the injustices happening at the barracks and make it harder for the home office to continue its brutal treatment of  people living in this country.

In recent weeks, the fight against immigration detention has had some success. Plans to ‘house’ asylum seekers at Yarl’s Wood in prison-like camps were axed thanks to persistent campaigning by locals and anti-detention groups. Now we must take this campaigning to the next level. We must insist that camps, detention centers and prisons of all kinds be closed. We must demand that suitable accommodation within the community be provided to all asylum-seekers and that they should have the right to move freely and safely, with full access to legal support and healthcare.

Our movement must strengthen our solidarity with all people in detention and fight to abolish the whole detention system. As abolitionists, we must work towards a world where no one is stripped of their freedom,  regardless of  immigration status.  We urge everyone to listen to and amplify the voices of those who are detained by taking action to close the barracks, in whichever way you can, and to ultimately fight for a world with no borders and no prisons.

As the government grants the police, and other arms of the state, increasingly more power and protection, we are forced to ask ourselves: who is protecting those of us abandoned by the state and how can we seek Read more… 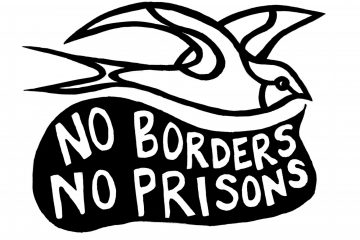 SDS statement on the Bristol Protest

On Sunday, 21st March 2021, the police in Bristol responded to protests with horrific violence. We condemn both the police’s use of violence and brutality towards protesters as well as anyone that has attempted to Read more… 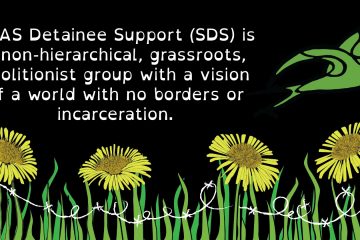 From Prisons to Immigration Detention: Abolish the Carceral State!

SOAS Detainee Support is a grassroots abolitionist group. A vision of a world without borders or prisons is at the centre of everything we aim to do.  We recognise that the border and the prison Read more…